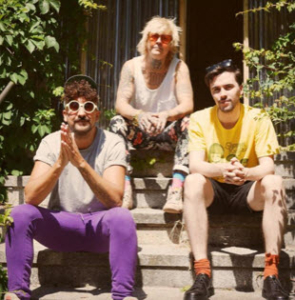 Few bands are as capable of being as direct and effective as Dancehall. The London / Kent-based trio who formed in 2016, run on a mix of egoless ambition which has seen the band self-release their debut album on 12″ LP and CD, two 7″s records and two cassette tape releases, earning praise from Wonderland, DIY, Clash Music, Dork Magazine Drowned in Sound and radio airplay from indie-rock tastemakers BBC 6 Music’s Tom Ravenscroft, Steve Lamacq and John Kennedy at Radio X, among others.

The band’s DIY ethics and hunger to tour and release their music on their own label Vibe/Anti-Vibe has seen them tour around Europe with shows in Germany, Belgium, the Netherlands and gained them attention from Rough Trade who invited to celebrate their release with a packed in-store at Rough Trade East as well as playing Rough Trade’s 40th Anniversary All-Dayer a year after forming.

Their label, Vibe/Anti-Vibe, started by guitarist and graphic designer Craig Sharp, received a distribution deal with Proper Music Group allowing the band’s self-released records and have them stocked worldwide.

Having a reputation for an energetic live show has earned the band support slots with legendary punk bands such as Kurt Cobain’s favourites Shonen Knife, Texan post-hardcore heroes …And You Will Know Us by the Trail of Dead as well as with their UK-based contemporaries Slowcoaches and False Advertising.

In 2018 Dancehall booked their own album launch tour around Europe in June and look to follow up with more dates in November and bring their energetic live show to as many countries they love as possible.